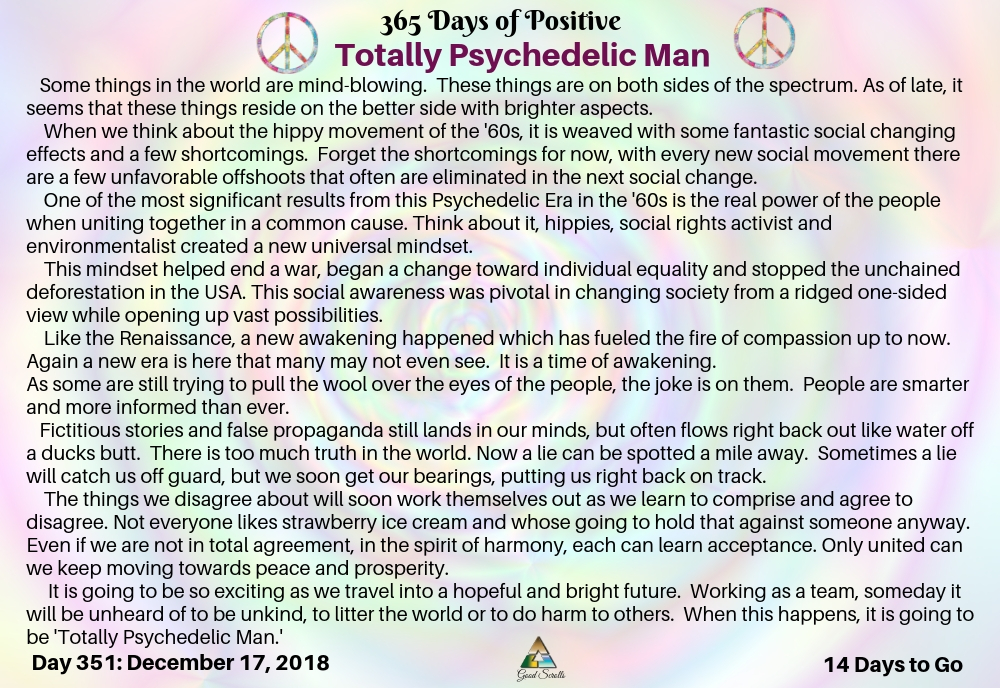 Some things in the world are mind-blowing.  These things are on both sides of the spectrum. As of late, it seems that these things reside on the better side with brighter aspects.

When we think about the hippy movement of the ’60s, it is weaved with some fantastic social changing effects and a few shortcomings.  Forget the shortcomings for now, with every new social movement there are a few unfavorable offshoots that often are eliminated in the next social change.

One of the most significant results from this Psychedelic Era in the ’60s is the real power of the people when uniting together in a common cause. Think about it, hippies, social rights activiest and environmentalist created a new universal mindset.

This mindset helped end a war, began a change toward individual equality and stopped the unchained deforestation in the USA. This social awareness was pivotal in changing society from a ridged one-sided view while opening up vast possibilities.

Like the Renaissance, a new awakening happened which has fueled the fire of compassion up to now.  Again a new era is here that many may not even see.  It is a time of awakening.

As some are still trying to pull the wool over the eyes of the people, the joke is on them.  People are smarter and more informed than ever.

Fictitious stories and false propaganda still lands in our minds, but often flows right back out like water off a ducks butt.  There is too much truth in the world. Now a lie can be spotted a mile away.  Sometimes a lie will catch us off guard, but we soon get our bearings, putting us right back on track.

The things we disagree about will soon work themselves out as we learn to comprise and agree to disagree. Not everyone likes strawberry ice cream and whose going to hold that against someone anyway.  Even if we are not in total agreement, in the spirit of harmony, each can learn acceptance. Only united can we keep moving towards peace and prosperity.

It is going to be so exciting as we travel into a hopeful and bright future.  Working as a team, someday it will be unheard of to be unkind, to litter the world or to do harm to others.  When this happens, it is going to be ‘Totally Psychedelic Man.’