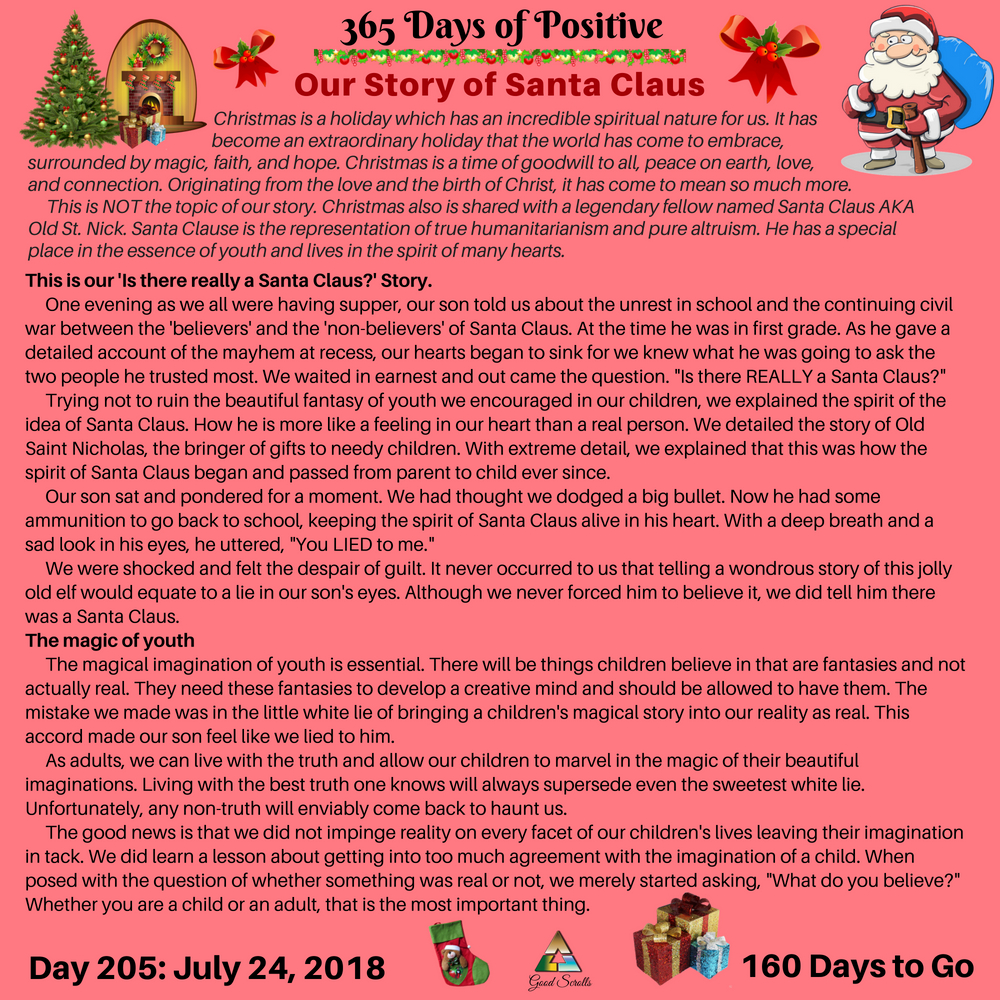 Christmas is a holiday which has an incredible spiritual nature for us. It has become an extraordinary holiday that the world has come to embrace, surrounded by magic, faith, and hope. Christmas is a time of goodwill to all, peace on earth, love, and connection. Originating from the love and the birth of Christ, it has come to mean so much more.

This is NOT the topic of our story. Christmas also is shared with a legendary fellow named Santa Claus AKA Old St. Nick. Santa Clause is the representation of true humanitarianism and pure altruism. He has a special place in the essence of youth and lives in the spirit of many hearts.

This is our ‘Is there really a Santa Claus?’ Story.

One evening as we all were having supper, our son told us about the unrest in school and the continuing civil war between the ‘believers’ and the ‘non-believers’ of Santa Claus. At the time he was in first grade. As he gave a detailed account of the mayhem at recess, our hearts began to sink for we knew what he was going to ask the two people he trusted most. We waited in earnest and out came the question. “Is there REALLY a Santa Claus?”

Trying not to ruin the beautiful fantasy of youth we encouraged in our children, we explained the spirit of the idea of Santa Claus. How he is more like a feeling in our heart than a real person. We detailed the story of Old Saint Nicholas, the bringer of gifts to needy children. With extreme detail, we explained that this was how the spirit of Santa Claus began and passed from parent to child ever since.

Our son sat and pondered for a moment. We had thought we dodged a big bullet. Now he had some ammunition to go back to school, keeping the spirit of Santa Claus alive in his heart. With a deep breath and a sad look in his eyes, he uttered, “You LIED to me.”

We were shocked and felt the despair of guilt. It never occurred to us that telling a wondrous story of this jolly old elf

would equate to a lie in our son’s eyes. Although we never forced him to believe it, we did tell him there was a Santa Claus.

The magic of youth

The magical imagination of youth is essential. There will be things children believe in that are fantasies and not actually real. They need these fantasies to develop a creative mind and should be allowed to have them. The mistake we made was in the little white lie of bringing a children’s magical story into our reality as real. This accord made our son feel like we lied to him.

As adults, we can live with the truth and allow our children to marvel in the magic of their beautiful imaginations. Living with the best truth one knows will always supersede even the sweetest white lie. Unfortunately, any non-truth will enviably come back to haunt us.

The good news is that we did not impinge reality on every facet of our children’s lives leaving their imagination in tack. We did learn a lesson about getting into too much agreement with the imagination of a child. When posed with the question of whether something was real or not, we merely started asking, “What do you believe?” Whether you are a child or an adult, that is the most important thing.

Granting others their beingness is not an agreement, but a willingness to live with each others reality.

Be well, Have Gratitude and Spread Goodwill