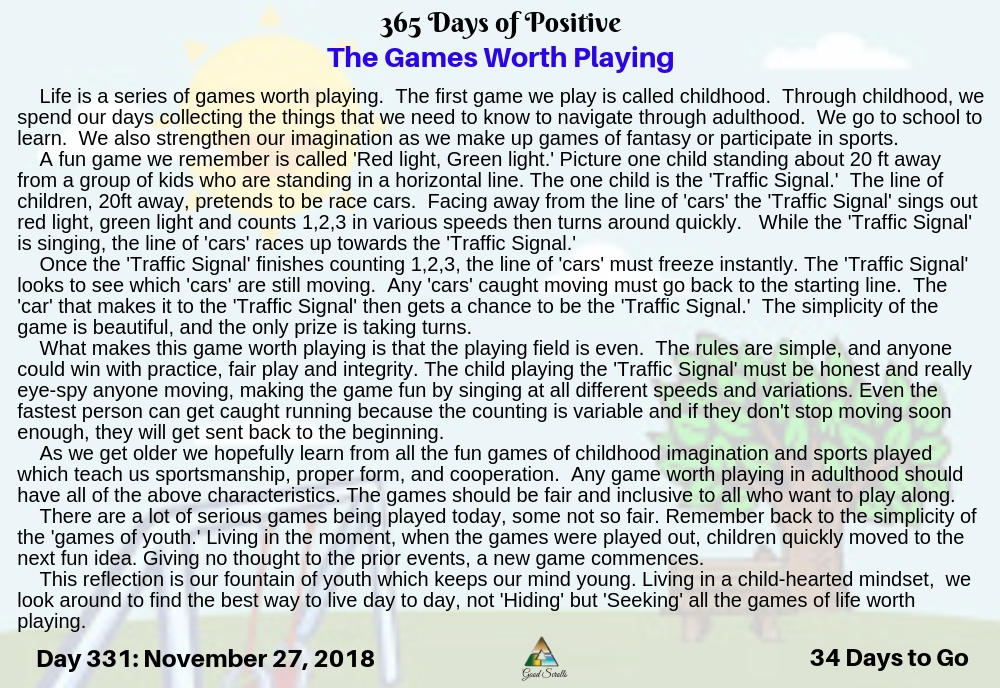 Life is a series of games worth playing. The first game we play is called childhood. Through childhood, we spend our days collecting the things that we need to know to navigate through adulthood. We go to school to learn. We also strengthen our imagination as we make up games of fantasy or participate in sports.

A fun game we remember is called ‘Red light, Green light.’ Picture one child standing about 20 ft away from a group of kids who are standing in a horizontal line. The one child is the ‘Traffic Signal.’ The line of children, 20ft away, pretends to be race cars. Facing away from the line of ‘cars’ the ‘Traffic Signal’ sings out red light, green light and counts 1,2,3 in various speeds then turns around quickly.

What makes this game worth playing is that the playing field is even. The rules are simple, and anyone could win with practice, fair play and integrity. The child playing the ‘Traffic Signal’ must be honest and really eye-spy anyone moving, making the game fun by singing at all different speeds and variations. Even the fastest person can get caught running because the counting is variable and if they don’t stop moving soon enough, they will get sent back to the beginning.

Our Fountain of Youth 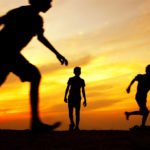 As we get older we hopefully learn from all the fun games of childhood imagination and sports played which teach us sportsmanship, proper form, and cooperation. Any game worth playing in adulthood should have all of the above characteristics. The games should be fair and inclusive to all who want to play along.

There are a lot of serious games being played today, some not so fair. Remember back to the simplicity of the ‘games of youth.’ Living in the moment, when the games were played out, children quickly moved to the next fun idea. Giving no thought to the prior events, a new game commences.

This reflection is our fountain of youth which keeps our mind young. Living in a child-hearted mindset, we look around to find the best way to live day to day, not ‘Hiding’ but ‘Seeking’ all the games of life worth playing.