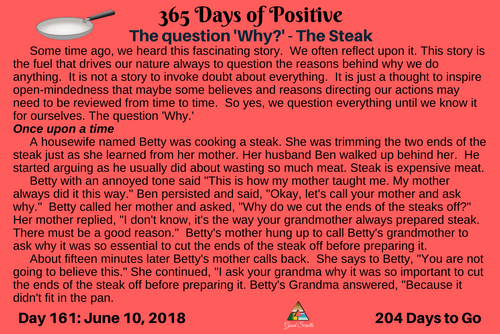 Some time ago, we heard this fascinating story. We often reflect upon it. This story is the fuel that drives our nature always to question the reasons behind why we do anything. It is not a story to invoke doubt about everything. It is just a thought to inspire open-mindedness that maybe some believes and reasons directing our actions may need to be reviewed from time to time. So yes, we question everything until we know it for ourselves. The question ‘Why.’

Once upon a time

A housewife named Betty was cooking a steak. She was trimming the two ends of the steak just as she learned from her mother. Her husband Ben walked up behind her. He started arguing as he usually did about wasting so much meat. Steak is expensive meat. Betty with an annoyed tone said “This is how my mother taught me. My mother always did it this way.” Ben persisted and said, “Okay, let’s call your mother and ask why.” Betty called her mother and asked, “Why do we cut the ends of the steaks off?” Her mother replied, “I don’t know, it’s the way your grandmother always prepared steak. There must be a good reason.” Betty’s mother hung up to call Betty’s grandmother to ask why it was so essential to cut the ends of the steak off before preparing it.
About fifteen minutes later Betty’s mother calls back. She says to Betty, “You are not going to believe this.” She continued, “I ask your grandma why it was so important to cut the ends of the steak off before preparing it. Betty’s Grandma answered, “Because it didn’t fit in the pan.

Who are we to question, Why?

A good question will often get you out of the frying pan and into the fire.

Be Well, Have Gratitude & Spread Goodwill 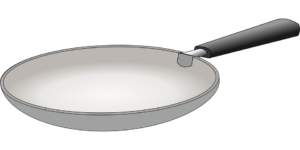