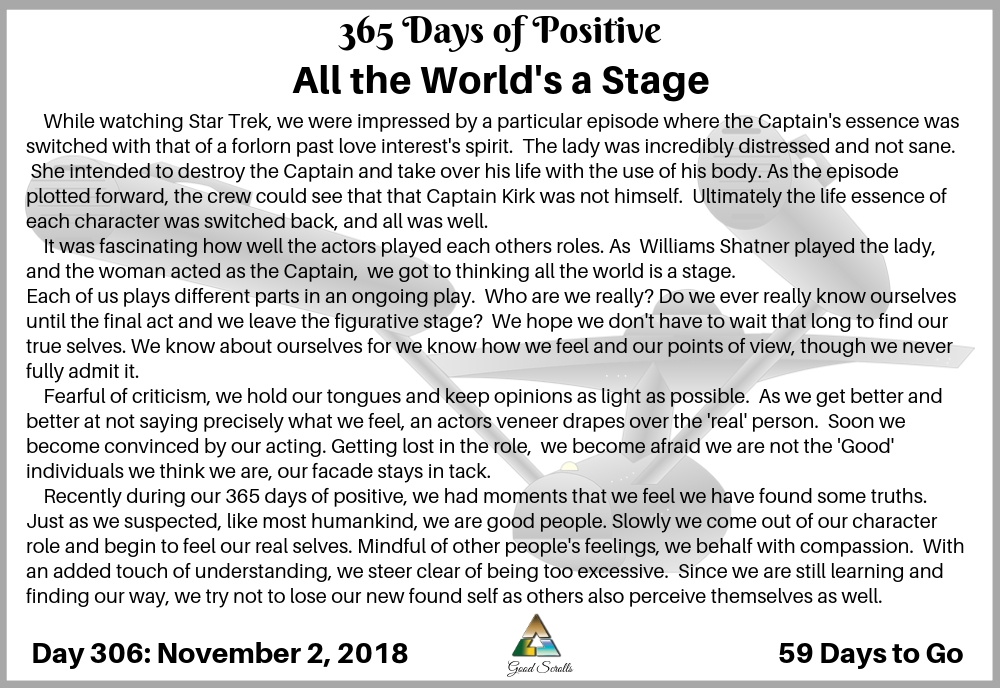 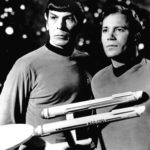 While watching Star Trek, we were impressed by a particular episode where the Captain’s essence switched with that of a forlorn past love interest’s spirit. The lady was incredibly distressed and insane. She intended to destroy the Captain and take over his life with the use of his body. As the episode plotted forward, the crew could see that that Captain Kirk was not himself. Ultimately the life essence of each character was switched back, and all was well.
It was fascinating how well the actors played each others roles. As Williams Shatner played the lady, and the woman acted as the Captain, we got to thinking all the world’s a stage.

Going where no man has gone before

Each of us plays different parts in an ongoing play. Who are we really? Do we ever really know ourselves until the final act and we leave the figurative stage? We hope we don’t have to wait that long to find our true selves. We know about ourselves for we know how we feel and our points of view, though we never fully admit it.

Fearful of criticism, we hold our tongues and keep opinions as light as possible. As we get better and better at not saying precisely what we feel, an actors veneer drapes over the ‘real’ person. Soon we become convinced by our acting. Getting lost in the role, we become afraid we are not the ‘Good’ individuals we think we are, our facade stays in tack.

Recently during our 365 days of positive, we had moments that we feel we have found some truths. Just as we suspected, like most humankind, we are good people. Slowly we come out of our character role and begin to feel our real selves. Mindful of other people’s feelings, we behalf with compassion. With an added touch of understanding, we steer clear of being too excessive. Since we are still learning and finding our way, we try not to lose our new found self as others also perceive themselves as well.

We can enjoy the fun roles we play in life and also return comfortably to who we really are deep inside.